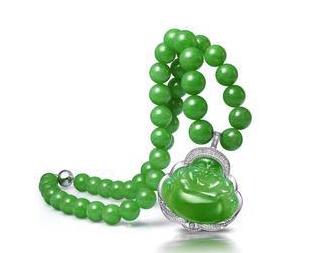 The once highly sought after jadeite suffered freezing. The "myth" that has only risen for ten years since 2002 and is almost "inflated" has also come to an end, and many jadeite investors have also suffered heavy losses. During the Shenzhen ICIF, Tian Dayu, deputy director of the Yunnan Provincial Cultural Industry Development Office, who has witnessed the development of the jadeite industry for many years, said that the jadeite industry has entered an â€œadjustment period,â€ but the jadeite market is â€œdormantâ€ rather than dead, and jadeite investment is still available.

Since 2002, the domestic jade market has experienced an astonishing madness, and prices have rocketed like rockets. Tian Dayu frankly stated that in the past 10 years, Jade has experienced a rapid development of the "mad decade."

Tian Dayu believes that the past decade of the jadeite market is both a crazy decade and a reasonable decade. â€œCrazyâ€ is because it breaks through the law of price changes of almost all commodities; â€œreasonableâ€ is because there is a strong market demand for luxury goods and consumption, which is an abnormal phenomenon that will inevitably occur in certain stages of economic and social development. .

The market is â€œhibernatingâ€ rather than dead Because of the long run, the Jade market has finally been unable to support it and needs to â€œbreak and restâ€. So from about the middle of 2011 until now, Jade Market has entered a period of automatic adjustment.

During this period, the overall sales of the jadeite market were slow, the market was weak, and the overall sales decreased slightly. Some consumers held their money on the sidelines, some consumers were pessimistically disappointed, and some consumers continued to play, but they were calmer than before. Emerald market prices suddenly braked, becoming the second period in 10 years without rapid price increases. Among them, the prices of high-end, high-end and high-end products remained strong, but they did not continue to run fast. The mid-end goods remained flat, the prices of low-end and mid-end goods fell slightly, and the rate of decline was different in different regions. About 20% -30%, about 10% -20% of the Yunnan market, about 20% of the Beijing market.

For many businesses, small-scale business operators have difficulties in operating, especially some small business owners who rely on debt to do business, and have to close their doors or change jobs; while those with a higher degree of organization and larger scale of operations are adjusting their business strategies. Including development strategies, marketing strategies and pricing strategies, and actively respond to the market.

Tian Dayu said that the blind social hot money stopped the rampage of the jadeite market, and the society's jade ambience began to cool down. Consumers tended to be rational and calm. In the past, the phenomenon of everyone talking about jade was no longer present.

For the freezing of the current jade market, Tian Dayu thinks this is a good thing. He said that if it does not undergo such adjustments and continues to be crazy like the previous years, the Jade market will collapse rather than just adjust, and some businesses will have no way to go.

However, Tian Dayu believes that the current jade market is only in a "dormant" state rather than a dead state. The current market, businesses continue to sell jade, but sell less, the price is slightly lower; customers still buy jade, but buy less, buy more rational; market as usual, the real connoisseurs are still To play Jade, did not give up because of the weak market, on the contrary has become more calm and ready to capture the favorable business opportunities. According to statistics from the Yunnan Jewelry Research Institute, in 2012 Yunnan's jewellery sales were 31.7 billion yuan, of which jade accounted for 86%, which was still 4.6% higher than the previous year, but not as much as the 20% increase in previous years.

Adjustment brought the market to restructure the adjustment period of the emerald market, and it has also become an important opportunity for the jade culture and the emerald industry's phoenix nirvana and rebirth.

Tian Dayao said frankly that the jade industry in the past was immature and even healthy. These immaturity or unhealthy problems may be gradually resolved during the market adjustment period. Due to the lack of jade standard, the jadeite industry objectively has a problem of â€œopportunity profitsâ€, thus causing the phenomenon of â€œclimbing back to heavenâ€ in the transaction.

The so-called â€œreturning to heavenâ€ means that in the jadeite transaction, because there is no standard, the price of the commodity is embodied in a range within which the merchant hopes to sell at a high level, thus marking the price at a very high level. The final transaction price depends on the customer's jade knowledge, individual preferences for the product, and these are all random, so it is very easy to lead to the phenomenon of â€œclimate pricesâ€.

Tian Dayu believes that a weak market may be a good thing. Among them, for the pricing standards, some businesses may resist the temptation of â€œopportunity profitsâ€ and explore new models based on operating costs plus reasonable profit pricing.

In addition, the rapid development of the jade industry in the past decade has resulted in insufficient self-regulation of the industry, and the rules of the industry system, standards, business psychology, and industry self-regulation have yet to be improved. Tian Dayu suggested that in the current sluggish market, all parties in the society need to conduct reflections and reviews, diagnosing and identifying problems, and gradually solve problems through measures such as building systems, strengthening standards, and setting standards, and further improving industry associations. Enhance industry self-discipline.

Jade is still the leader in luxury investment. Tian Dayu is still optimistic about the future of the jade market. He pointed out that there are multiple grounds to support it. First of all, jade resources are rare. 95% of the world's emeralds are in Burma. Second, Jadeites are physically characteristic, fine, hard, moist, beautiful, infinitely changeable, and infinitely plentiful; Jade culture has given jade its cultural, artistic, character, spirituality, morality, religion, and other values. It has been perfectly embodied in Jade. Fourth, the economy is developing, society is improving, and spare money is bound to look for opportunities. Fifth, allergies have luxury. In terms of spending power, China has been ranked as the third largest consumer of luxury goods in the world for five consecutive years. Sixthly, the mainland's market system for commodities is still not perfect, and investors are afraid of depreciation. They have low returns on buying bonds, risk of buying stocks, and are unable to buy gold, so jewellery and jade have become important products in the market.

Tian Dayu analyzed that the overall public mentality has gradually become more rational, and jadeite fans have become the backbone of the recovery and normal development of the jadeite industry. For investment buyers, some will value the physical characteristics, artistic charm, and cultural value of Jade and continue to favor jadeite jade. Some people will turn to other investment products; if the market is normal to pick up, there is little chance of another maniac. However, if the cause of an anomaly triggers a rapid rebound, then it will inevitably rise again and again with the public's consumer psychology. However, Tian Dayu said that after the storm, Jade's position in the luxury market will be further consolidated. In the luxury goods market, Jade will be favored by consumers with its unique artistic taste and cultural value. In the investment product market, Jadeite's value-preserving and value-added features still have advantages. It is easy to identify, can be evaluated, and the risks are small and professional. Knowledge does not need to be too deep. Therefore, in the future, Jade is still the leader in the luxury goods and investment products market.